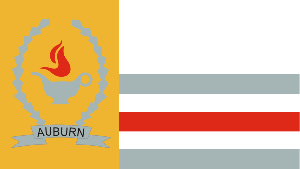 The city of Auburn lies in western Lee County and is bordered by the city of Opelika to the northeast and by Chambers County to the north. The city stretches south to the Macon County line in the southwest.

Auburn sits on the Fall Line at the juncture of the piedmont plateau and the coastal plain. Portions of Auburn also include the southernmost exposure of rocks indicating the Appalachian orogeny—as such, the last foothill of the Appalachian Mountains lies in Chewacla State Park in southern Auburn. As a result of these three varied physical environments, Auburn has an extremely diverse geology.

The southwest and west regions of the city on the plateau are marked by rolling plains and savannahs, with the undeveloped portion primarily being used for cattle grazing and ranching. South of this region sits the coastal plain, with sandy soil and pine forest. Parts of north Auburn have much more rugged topographies, with thick forests in high hills and deep hollows of the type common to parts of eastern Tennessee. The region surrounded by Chewacla Park in the south of the city contains sharp peaks and sudden drops of elevation as the 1.05 billion-year-old rock of the Appalachians meets the coastal plain.