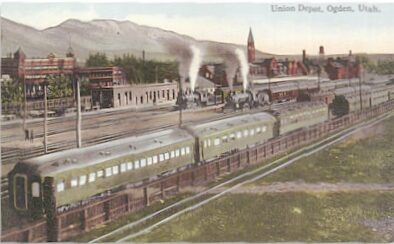 Ogden /ˈɒɡdən/ is a city and the county seat of Weber County, Utah, United States, approximately 10 miles (16 km) east of the Great Salt Lake and 40 miles (64 km) north of Salt Lake City. The population was 87,773 in 2019, according to the US Census Bureau, making it Utah's 7th largest city. The city served as a major railway hub through much of its history, and still handles a great deal of freight rail traffic which makes it a convenient location for manufacturing and commerce. Ogden is also known for its many historic buildings, proximity to the Wasatch Mountains, and as the location of Weber State University.

Ogden is a principal city of the Ogden–Clearfield, Utah Metropolitan Statistical Area (MSA), which includes all of Weber, Morgan, Davis, and Box Elder counties. The 2010 Census placed the Metro population at 597,159. In 2010, Forbes rated the Ogden-Clearfield MSA as the 6th best place to raise a family. Ogden has had a sister city relationship to Hof (Germany) since 1954. The current mayor is Mike Caldwell.