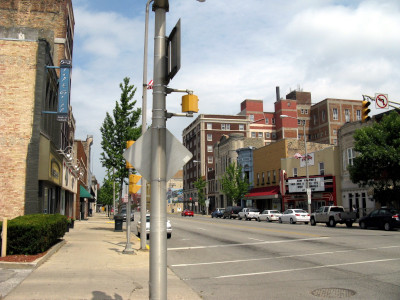 Elkhart/ˈɛlkɑːrt/ is a city in Elkhart County, Indiana, United States. The city is located 15 miles (24 km) east of South Bend, Indiana, 110 miles (180 km) east of Chicago, Illinois, and 150 miles (240 km) north of Indianapolis, Indiana. Elkhart has the larger population of the two principal cities of the Elkhart-Goshen Metropolitan Statistical Area, which in turn is part of the South Bend-Elkhart-Mishawaka Combined Statistical Area, in a region commonly known as Michiana. The population was 50,949 at the 2010 census. Despite the shared name and being the most populous city in the county, it is not the county seat of Elkhart County; that position is held by the city of Goshen, located about 10 miles (16 km) southeast of Elkhart.